Lakes on Greenland Ice Sheet can drain huge amounts of water, even in winter


The researchers, from the University of Cambridge, used radar data from a European Space Agency satellite to show that even when the heat from the Sun is absent, these lakes can discharge large amounts of water to the base of the ice sheet. These ‘drainage events’ are thought to play a significant role in accelerating the movement of the ice by lubricating it from below.

Previous studies of draining lakes have all been carried out during the summer months, through a combination of direct field observations and optical satellite data, which requires daylight.

The approach developed by the Cambridge researchers uses the radar ‘backscatter’ – the reflection of waves back to the satellite from where they were emitted – to detect changes in the lakes during the winter months, when Greenland is in near-total darkness.

The results, reported in the journal The Cryosphere, imply that the ‘plumbing’ system beneath the Greenland Ice Sheet doesn’t just slowly leak water from the previous summer, but even in the depths of the Arctic winter, it can be ‘recharged’, as large amounts of surface lake water cascade to the base of the ice sheet.

Many previous studies have shown that the Greenland Ice Sheet is losing mass, and the rate of loss is accelerating, due to melting and runoff.

“One of the unknowns in terms of predicting the future of the ice sheet is how fast the glaciers move – whether they will speed up and if so, by how much,” said co-author Dr Ian Willis from Cambridge’s Scott Polar Research Institute (SPRI). “The key control on how fast the glaciers move is the amount of meltwater getting to the bottom of the ice sheet, which is where our work comes in.”

Lakes form on the surface of the Greenland ice sheet each summer as the weather warms. They exist for weeks or months but can drain in a matter of hours due to hydrofracturing, transferring millions of cubic metres of water and heat to the base of the ice sheet. The affected areas include sensitive regions of the ice sheet interior where the impact on ice flow is potentially large.

“It’s always been thought that these lakes drained only in the summer, simply because it’s warmer and the sun causes the ice to melt,” said co-author Corinne Benedek, also from SPRI. “In the winter, it’s dark and the surfaces freeze. We thought that the filling of the lakes is what caused their eventual drainage, but it turns out that isn’t always the case.”

Benedek, who is currently a PhD candidate at SPRI, first became interested in what happens to surface lakes in the winter while she was a Master’s student studying satellite thermal data.

We don’t yet know how widespread this winter lake drainage phenomenon is, but it could have important implications for the Greenland Ice Sheet, as well as elsewhere in the Arctic and Antarctic

“The thermal data showed me that liquid water can survive in the lakes throughout the winter,” she said. “Previous studies using airborne radar had also identified lakes buried a few metres beneath the surface of the ice sheet in the summer. Both of these things got me thinking about ways to observe lakes all year long. The optical satellite imagery we normally use to observe the lakes isn’t available in winter, or even when it’s cloudy.”

Benedek and Willis developed a method using data from the Sentinel-1 satellite, which uses a type of radar called synthetic aperture radar (SAR). SAR functions at a wavelength that makes it possible to see through clouds and in the dark. Ice and water read differently using SAR, and so they developed an algorithm that tracks when sudden changes in SAR backscatter occur.

Over three winters, they identified six lakes that appeared to drain over the winter months. These lakes were buried lakes or surface lakes that were frozen over. The algorithm was able to identify where the backscatter characteristics of the lake changed markedly between one image and the next one recorded 12 days later.

The SAR data was backed up with additional optical data from the previous autumn and subsequent spring, which confirmed that lakes areas shrank considerably for the six drained lakes. For three of the lakes, the optical data, as well as data from other satellites, was used to show the snow- and ice-covered lakes collapsed, dropping by several metres, again confirming the water had drained.

“The first lake I found was surprising,” said Benedek. “It took me a while to be sure that what I thought I was seeing was really what I was seeing. We used surface elevation data from before and after the events to confirm what we were thinking. We know now that drainage of lakes during the winter is something that can happen, but we don’t yet know how often it happens.”

“Glaciers slow down in the winter, but they’re still moving,” said Willis. “It must be this movement that causes fractures to develop in certain places allowing some lakes to drain. We don’t yet know how widespread this winter lake drainage phenomenon is, but it could have important implications for the Greenland Ice Sheet, as well as elsewhere in the Arctic and Antarctic.” 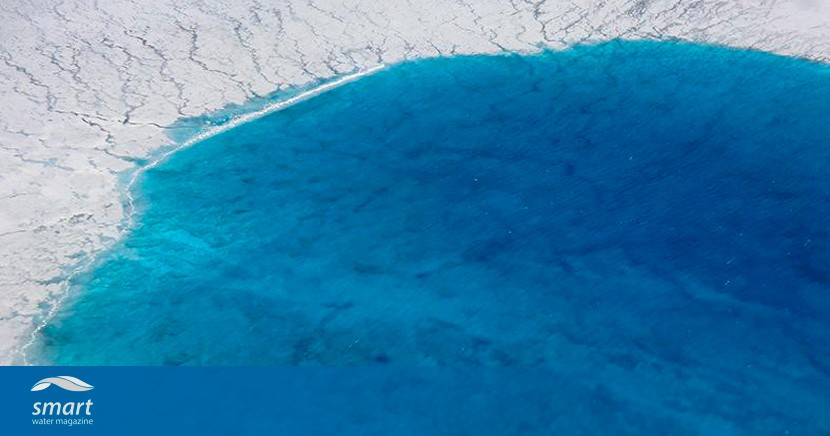