Egypt is classified as water scarce and is expected to cross the extreme water scarcity threshold by 2025. The country experiences fast population growth of a million every six months, causing an increased pressure on dwindling natural resources. Egypt has no other option than to fundamentally rethink the way the country uses its water and energy resources.

Since 2016, the Nexus Regional Dialogue Programme in the Middle East and North Africa Region has been working across the region to institutionalise the Water Energy Foof Nexus in public policy and planning in addition to demonstration projects that show the value-added of the WEF Nexus, capacity building activities and the identification of financing opportunities.

A Training of Trainers

During the period of 4th -6th August 2022, a Training of Trainers T.O.T workshop has taken place in Dandara, Upper Egypt seeing the active participation of 16 young graduates from the faculty of agriculture from South Valley university.

The first day started by introducing them to the Climate Change and its impacts on Water-Energy and Food, followed by water scarcity awareness session, then the Water-Energy-Food nexus approach and its importance have been explained to them by the GIZ representative. •

The second day included a field visit to the Water-Energy-Food Nexus farming model in Dandara constructed by Gebal and Schneider electric as a successful model for WEF nexus application.

The model is a solar-powered, integrated nexus greenhouse installed by GEBAL which enables an integration of sustainable energy, water management, and food production via the following technical specifications:

They integrate fish and crop production through a circular water management system, thus ensuring “more crop per drop” of water, as well as the diversification of farming outputs (fish and vegetables) and an enhancement of local access to healthy and nutritious food.

The visit was followed by a detailed explanation of WEF Nexus greenhouse operation followed by a session tackling solar energy and its applications in agriculture, then the day ended by three sessions tackling training skills and guidance on how to be a successful trainer and a WEF Nexus ambassador – using the WEF Nexus Training Material.

On the third day the participants had a practical task to apply what they have learned during the two previous days, and they managed to train 30 farmers from the surrounding community on the WEF nexus framing and its importance. •

As a next step, each participant of this T.O.T will train around 10 farmers, upon completion of this task, they will be granted a certificate as a trainer. 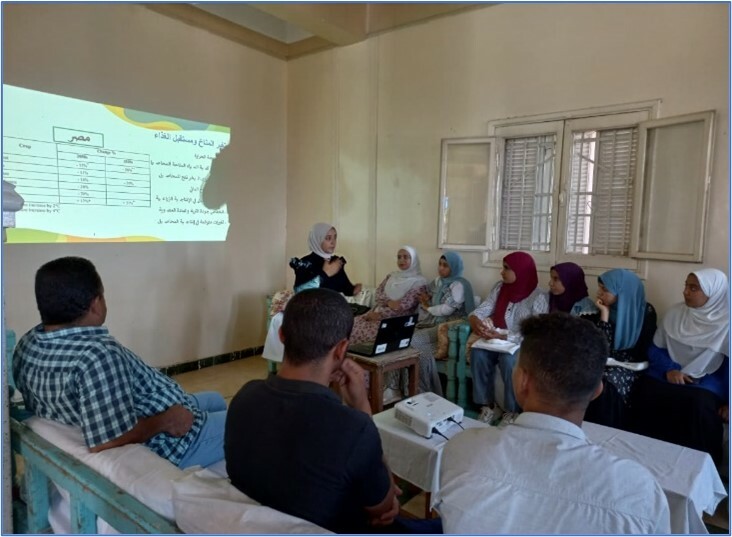