When it comes to ensuring that a community has clean drinking water, there isn’t a one-size-fits-all solution. Urban and rural communities have different needs, different resources and face different challenges.

Through a prestigious National Science Foundation CAREER Award, Joseph Goodwill, assistant professor of environmental engineering at the University of Rhode Island, is researching a water treatment method that could be especially useful for small, rural communities.

The five-year, $507,240 award will enable Goodwill to work with ferrate and sulfite to develop an advanced oxidation method that can be used to treat water.

According to Goodwill, there is a widening gap between urban and rural communities when it comes to their ability to provide clean drinking water.

Having grown up in the small town of Camden, New York, which is about an hour north of Syracuse, Goodwill said this subject resonates with him.

“One approach to environmental engineering doesn’t work for communities of all sizes,” said Goodwill. “Rural areas, or communities with developing economies, might not be in a position to do what works in cities such as Boston or Providence.”

Ever since Goodwill was a doctoral student, he’s been intrigued by how chemicals could be used to convert contaminated water into clean drinking water. For his dissertation, he worked closely with ferrate, a form of iron, to see if the chemical would be beneficial in a water treatment context.

Goodwill continued to work with ferrate when he became a professor at URI.

“Taking wastewater, or what we would call sewage, I was trying to treat it to such a high quality that it could be reused in a beneficial way,” said Goodwill. “The reuse purposes could include irrigation, recreation, or in some instances, it could be rendered to a potable quality and be distributed back to communities.”

However, Goodwill didn’t get the results he hoped to see.

“Evaluating ferrate in a water reuse context just wasn’t working,” said Goodwill. “We were having challenges oxidizing and treating some of the target contaminates. I was frustrated and concerned because it was one of my first funded projects as a young professor and it wasn’t working out so great.”

Goodwill then read about a study by researchers at Texas A&M University that described a significantly improved performance by ferrate when a small amount of sulfite, a form of sulfur, was added.

“I was so intrigued and heartened by their results that we started trying it in our lab at URI,” said Goodwill. “It also worked for us, which was great.”

With positive results from the ferrate-sulfite combination, the next step was to learn why the two chemicals work well together and how they can be used. That’s one of the major objectives of the NSF CAREER Award project.

“We do not really understand the fundamental chemistry of what happens when you mix ferrate and sulfite,” Goodwill said. “We know that it probably includes the formation of what we call free radicals, which we want to make because those are the strongest oxidants and are typically successful at oxidizing or transforming contaminates that are the most difficult to treat. But we don’t really know how they are made and how much of them are made. Until we know exactly what’s happening, we can’t optimize, leverage and deploy this approach.”

Goodwill is excited about what being able to produce the right chemical combination would mean to small water treatment operations.

“The ability to generate free radicals, very strong oxidants, could be especially valuable to rural and small systems,” said Goodwill. “However, the current methods we have for advanced oxidation, meaning oxidation using radicals, are relatively complex and require onsite generation of inputs.”

An example of an advanced oxidation method can be found at Boston’s water treatment plant, where the team produces ozone.

“Boston has big ozone generators, but that system requires air handling, dehumidification, power supplies and cooling systems,” Goodwill said. “Those types of auxiliary systems are often out of reach or not the appropriate solution for small, rural systems. If our only choice for advanced oxidation is to do what Boston does, I don’t think that’s an adequate answer for these small systems.”

“I’m hopeful that when we figure all of this out in a few years or so, rural communities, and perhaps communities in developing countries, will have a new tool available to do advanced oxidation in an operationally simple way,” said Goodwill.

Goodwill is looking forward to introducing advanced oxidation to engineering students at URI, which is another major objective of the CAREER Award project.

“I scoured the internet for publicly-available syllabi of undergraduate environmental engineering laboratory courses, looking for references to advanced oxidation in the curriculum,” said Goodwill. “I only found it in about 10 percent of syllabi. That’s problematic because advanced oxidation is becoming more important in environmental engineering, yet we often don’t cover it in our hands-on laboratory classes.”

The main reason advanced oxidation hasn’t been widely taught is because previous methods were deemed too complex and unsafe. However, taking the approach with ferrate and sulfite will allow students to experience the fundamentals of advanced oxidation in a hands-on way, without the associated complexities and safety concerns.

The students will learn about advanced oxidation by taking advantage of the pilot (water treatment) plant materials purchased by the College of Engineering for about $200,000. Funding for the plant was largely provided by the Champlin Foundation and the U.S. Department of the Interior.

The apparatus was primarily constructed by one of Goodwill’s current graduate students, C.J. Spellman, and is located in the Water for the World Laboratory.

The pilot plant is a 1/10,000th scale-downed version of a real water treatment plant.

“It has all the bells and whistles a full-scale facility would have in terms of its ability to measure a host of different water quality parameters in real-time,” said Goodwill.

The equipment will be used for the project in three ways: to generate data on the ferrate-sulfite system, to introduce undergraduates to the fundamentals of physical-chemical water treatment processes, and to demonstrate water treatment to the general public.

• A solution of potassium ferrate, a strong oxidant that has been shown to treat many contaminants. Photo courtesy of Joseph Goodwill.

Through a partnership with Rhode Island 4H, Goodwill and his students will transport that pilot facility to the Washington County Fair, where they will conduct demonstrations of water treatment to the general public. This might not happen to until 2022, when it is safer to do so due to the pandemic.

“The public’s resistance to water reuse is referred to as the ‘ick factor,'” said Goodwill. “People understandably have some resistance to being exposed to water that at one point was sewage. But the reality is we have the scientific tools to render water from sewage to potable water quality. There are cities doing it right now. My hope is that by taking this to public outreach events, we’ll demonstrate the ability to transform the most resistant and harmful pollutants and produce safe water in a way that the public will appreciate and better understand.”

During the course of the project, Goodwill expects to consult with Dugan Hayes, assistant professor of chemistry at URI.

“Dugan is an internationally-renowned expert in ultrafast spectroscopy, which is the approach I’m going to be leveraging to elucidate these iron radicals,” said Goodwill.

Goodwill’s group will also use scientific equipment that is managed by Irene Andreu in the Rhode Island Consortium for Nanoscience and Nanotechnology, which can be found in the basement in URI’s Fascitelli Center for Advanced Engineering.

A start-up company in League City, Texas, called Element 26 Technology, will supply the ferrate that Goodwill will use in his research.

“They have a patented method for the production of potassium ferrate, which is the form of ferrate we’ll be studying,” said Goodwill. “The ability to produce industrial quantities of ferrate is relatively new, but I believe there’s evidence that it would be cost-competitive. I hope the combination of simplicity and cost-competitiveness will be to the advantage of small water utilities. “

NSF CAREER Awards support early-career faculty who have the potential to serve as academic role models in research and education and to lead advances in the mission of their department or organization.

“In the short time he has been at URI, Dr. Goodwill has established a successful research and education program in environmental engineering,” said URI Associate Professor Leon Thiem in his letter recommending Goodwill for the award. “I have seen how the hands-on educational components in his courses have inspired students to deepen their involvement in environmental engineering.”

Vinka Craver, 2014, $489,200: Bacterial adaptation mechanism to chronic exposure to nanoparticles and its implications to nanomanufacturing and public health. 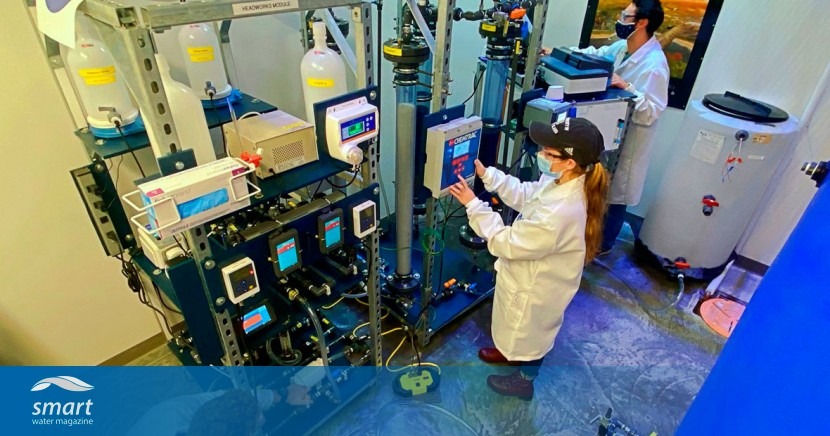