A team of researchers from the National University of Singapore (NUS) has recently developed a simple solution to address two of the world’s biggest problems – water scarcity and food shortage. They created a solar-powered, fully automated device called ‘SmartFarm’ that is equipped with a moisture-attracting material to absorb air moisture at night when the relative humidity is higher, and releases water when exposed to sunlight in the day for irrigation.

SmartFarm has another advantage – the water harvesting and irrigation process can be fine-tuned to suit different types of plants and local climate for optimal cultivation. The hygroscopic material that is used in the SmartFarm was earlier tested by Hawai’i Space Exploration Analog and Simulation (HI-SEAS) for its application for humidity control for space-based agriculture.

“Atmospheric humidity is a huge source of freshwater but it has remained relatively unexplored. In this work, we’ve tried to mitigate food and water shortage simultaneously. We created a hygroscopic copper-based material and used it to draw moisture from the air. We then integrate this material into a fully automated solar-driven device that utilises the harvested water to irrigate plants daily without manual intervention,” explained project leader Assistant Professor Tan Swee Ching, who is from the Department of Materials Science and Engineering at NUS.

This work was published in the print edition of scientific journal Advanced Materials in October 2020.

The key component of the SmartFarm device is a specially designed copper-based hydrogel, which was produced using an economical and time-saving process. This material is extremely absorbent, and takes in moisture up to three times its weight. After acquiring moisture, the hydrogel changes colour from brown to dark green and finally to light green when it is saturated with moisture. It also releases water quickly under natural sunlight – one gram of the copper-based hydrogel releases 2.24 gram of water per hour.

These interesting properties make it attractive for application in the SmartFarm device.

a control panel system to operate the device, including the open and closing of the top cover of the device

Asst Prof Tan said, “The SmartFarm concept greatly reduces the demand for freshwater for irritation and is suitable for urban farming techniques such as large-scale rooftop farming. This is a significant step forward in alleviating water and food scarcity in the near future.”

“We have also forged a collaboration with HI-SEAS to experiment the application of our hydrogel for humidity control in extra-terrestrial plant growth chambers. We also hope to explore other potential space applications,” he added.

HI-SEAS is a remote facility located on the lava fields of Hawaii’s Mauna Loa volcano that is designed to simulate long duration missions to the Moon and Mars. Mr Benjamin Greaves, who joined the Selene II simulated Moon mission at HI-SEAS which took place from November to December 2020, used the hydrogel developed by the NUS team to control the humidity in small experimental greenhouses to grow and sustain crops of edible microgreen sunflower plants and upland cress for the mission astronauts.

“These are perfect for space exploration, because we have a very limited amount of space to grow plants up there, but these microgreens are still packed with nutrients, vitamins and minerals,” Mr Greaves said. The hydrogel-cultivated plants provided a welcome fresh supplement to the freeze-dried food supplied for the bulk of the mission.

The NUS team envisage that the SmartFarm device can be further enhanced with additional functionalities before it moves to large-scale and commercial production. For example, a multi-tiered structure could be designed to maximize the utility of rooftop spaces to increase food production, and an air-cooled condenser could be added to the device if the plants are susceptible to temperature.

Furthermore, to guard against prolonged cloudy days, a heating system could be embedded in the container of copper-based hydrogel to provide sufficient thermal energy to activate the water releasing process without sunlight. In addition, the SmartFarm device can incorporate wireless networking capability to enable users to monitor and control the cultivation process using smartphones.

The NUS team is in discussion with commercial partners to explore commercialisation opportunities. 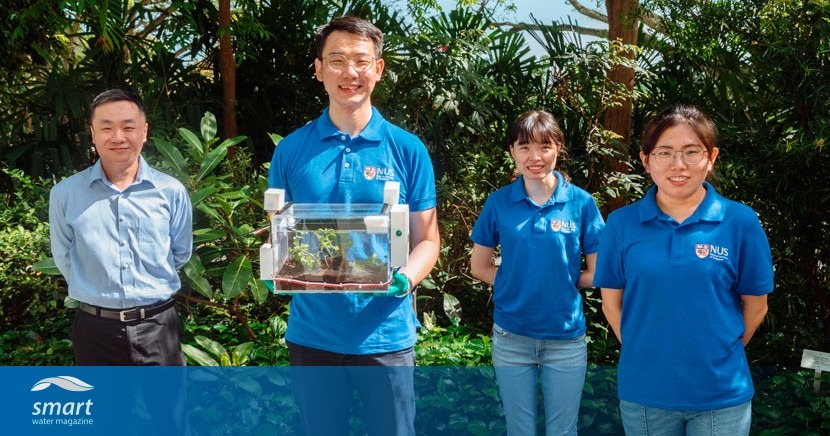