Per- and polyfluoroalkyl substances (PFAS) in ski wax have been receiving a lot of attention recently, but waxes constitute only a limited part of the problem of the PFAS group of toxic fluorocarbons .

“PFAS are a large group of toxicants, and you are most likely full of them.”

PFAS are a large group of man-made fluorocarbon toxicants, and you are most likely full of them. The toxic substances don’t break down and instead accumulate, both in nature and in your body.

“Due to their extensive use, humans and animals all over the world are continuously exposed to PFAS,” says NTNU PhD candidate Håkon Austad Langberg, who has studied several of them in the last few years.

PFAS are used in many different products beyond the fluorinated ski wax that ends up in the ground on ski slopes and on trails, including Teflon, firefighting foam, water- and grease-repellent paper and impregnated textile fabrics, among many others.

A number of health problems can be traced back to PFAS.

“There are thousands of different PFAS,” says Langberg.

Toxic substances like PFAS can accumulate in fish. This photo is from sampling done in Lake Tyrifjord, where health authorities warn against eating the fish. Photo: Håkon Austad Langberg, NTNU

Have to understand them to do something about them

A number of health problems can be traced back to PFAS. The toxic substances are either proven or suspected to increase the risk of kidney and testicular cancer, damage to the liver, disrupted cholesterol levels, reduced fertility, hormonal disorders, negative effects on development in children and weakened immune systems.

Langberg’s research has included investigating how PFAS from individual Norwegian sources behave in the environment.

“That is, where they end up, like in waterways or the seabed, how they’re transported in the environment and how they’re taken up into the food chain,” he says.

We need to understand how various toxic substances behave in nature in order to assess their risks, give the right advice on food and drink that could be PFAS contaminated and to clean contaminated areas.

“I investigated Svalbard Airport and Bodø Airport, both of which are polluted due to the use of firefighting foam, and Lake Tyrifjord, which is polluted by a factory that produced paper products,” he says.

Runoff from the airports that Langberg investigated flow into the sea. Marine fish and crabs near the airports had higher levels of PFAS than those found in other areas, but due to the water exchange in the ocean, the levels were limited.

Norwegian women and children ingest too much PFAS, according to a statement by the Norwegian Institute of Public Health last year. Fish is often the source.

Despite the name, Tyrifjord in Viken county is actually a lake, and toxic pollutants can therefore accumulate quite strongly there.

The fire drill field on Svalbard. Here there is a large runoff to the sea, and thus the toxins are not as concentrated as near a lake. Photo: Håkon Austad Langberg, NTNU

PFAS stands for per- and polyfluoroalkyl substances. None of the many thousands of these substances break down in nature. Well, that’s not entirely true. Some of them do break down, but only into other PFAS variants which in turn do not degrade. PFAS that can be converted to non-degradable PFAS are called PFAS precursors.

Once these toxic substances are released into nature, for all practical purposes they will remain there permanently or until they are actively cleaned up.

The properties of the substances, and thus their behaviour in the environment, change when PFAS precursors are converted to non-degradable PFAS. Many PFAS precursors become more water soluble when converted. More water-soluble substances are in turn often more available for uptake into organisms and can also be transported faster by water currents.

Since different PFAS are used in different products, it is possible to find out which emission source has polluted what.

“For example, different types of PFAS are used in firefighting foam than the ones used to make paper water- and grease repellent,” Langberg says.

Lake Tyrifjord may look idyllic, but conditions aren’t as pristine as you might be tempted to believe. Photo: Håkon Austad Langberg, NTNU

Many sources of PFAS contamination are due to local use, either of the toxicants directly or of products that contain them. The surrounding environment near these point sources has often been shown to contain high concentrations of the toxic pollutants in water, the soil and seabed, and in fish and other animals.

“Factories where PFAS is produced are among the most researched point sources, along with places where PFAS-containing firefighting foam is used, such as at airports,” says Langberg.

People who drink water or eat plants, fish or other animals from such areas risk being exposed to significant levels of PFAS in addition to the continuous exposure that we all experience.

“By looking at the composition of the PFAS detected in Lake Tyrifjord, we concluded that a factory producing paper products was the source of the pollution in the lake,” said Langberg.

The PFAS released into Lake Tyrifjord are not very water-soluble. The pollutants are located on the lake bottom and can thus be absorbed into the food chain over time.

“In Lake Tyrifjord, these PFAS precursors are a continuous source of poison in the food chain since they’re ingested by bottom feeders that are later eaten by fish,” Langberg says.

Fish usually ingest these kinds of compounds from the surrounding water, but in Lake Tyrifjord the water concentrations are low, and the uptake of the pollutants instead happens via the fish’s diet.

In this way, the substances in the food chain are transferred and converted over time to the non-degradable PFAS that are detected in significant amounts in fish.

“The pollution in Lake Tyrifjord wouldn’t have been detected if only water samples had been taken. That’s why our sampling also needs to include the seabed and various animal species if we don’t know the source of the PFAS pollution, or if PFAS with unknown behaviour have been released into the environment,” says Langberg.

This is the first time the production of paper products has been identified as leading to significant local pollution. The research shows that PFAS quantities released into Lake Tyrifjord are very high.

Langberg believes the production of paper products is probably a large and overlooked source of pollution elsewhere as well.

Langberg’s research illustrates the need to assess risk from chemicals in consumer goods, starting during production, in the use phase and after the product lifespan.

“The EU is focusing on this topic through the development of a ‘Chemicals strategy for sustainability,’ which is a good thing,” says Langberg’s supervisor Sarah Hale. She is a senior specialist at the Norwegian Geotechnical Institute.

The results from Langberg’s dissertation provide valuable information about contaminated areas. The new knowledge can be used later to identify sources of pollution, make risk assessments and assess remediation measures.

The work is part of a larger project called “Reducing the negative effects of fluorinated substances on the environment and humans” which is funded by the Research Council of Norway via project 268258. 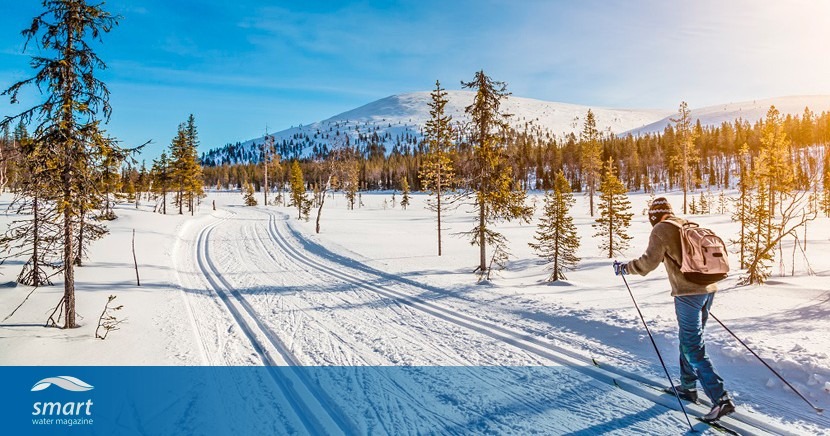