Veolia and Suez reach an agreement to merge the two groups


Veolia and Suez have announced today that their boards of directors reached and agreement on the key terms and conditions of the merger between them. The two groups have agreed to enter into definitive merger agreements by May 14.

The agreed price per SUEZ share is €20.50, conditional upon the signature of the Combination Agreement. Suez Chairman Philippe Varin had said last month that the Suez board would be open to negotiate if Veolia improved its initial offer of €18 per share. The offer will be recommended by the Board of Directors of Suez and will be subject to a fairness opinion, as per applicable regulations.

According to a statement released by both Veolia and Suez, the new agreement would allow “the creation of a new SUEZ made up of assets forming a coherent and sustainable group from an industrial and social standpoint, with real growth potential, with revenues of around €7 billion”. Furthermore, it will enable “the implementation of Veolia’s plan to create a global champion of ecological transformation, with revenues of around €37 billion, through the SUEZ takeover bid, in which all the strategic assets identified by Veolia will remain”.

In addition, the agreement allows Veolia to reiterate its social commitments for four years after the signature, and allows for additional commitments by Veolia concerning the integration of management teams.

The two companies propose a new SUEZ owned by majority of French shareholders, including financial partners from both groups, and employees. Moreover, shareholders will have to subscribe social commitments for four years, and maintain their positions in the long term.

The scope will include SUEZ’s municipal water and solid waste activities in France, as well as SUEZ’s water activities in Italy, Czech Republic, Africa, Central Asia, India, China, Australia, and the global digital and environmental activities.

The agreement also provides for the deactivation of the Dutch foundation in relation with the SUEZ announcements, and the termination of the agreements with Cleanaway in accordance with their terms concerning the disposal of the assets in Australia and the suspension of any other significant disposal. This allows Veolia to acquire all the assets designated as strategic in its draft offer document filed on February 8 with the Autorité des marchés financiers.

Finally, ongoing legal proceedings will be suspended, and both companies will refrain from litigation. SUEZ, Veolia and the shareholders of the new SUEZ also agree to cooperate to obtain all necessary authorizations.

Suez Chairman Philippe Varin said: “We have been calling for a negotiated solution for many weeks and today we have reached an agreement in principle that recognizes the value of SUEZ. We will be vigilant to ensure that the conditions are met to reach a final agreement that will put an end to the conflict between our two companies and offer development prospects”.

Antoine Frérot, Chairman and CEO of Veolia, stated: “I am particularly pleased to announce today the conclusion of an agreement between SUEZ and Veolia that will enable the construction of the world champion of ecological transformation around Veolia, offering France a reference player in a sector that is probably the most important of this century. This agreement is beneficial for everyone: it guarantees the long-term future of SUEZ in France in a way that preserves competition, and it guarantees jobs. All stakeholders in both groups are therefore winners. The time for confrontation is over, the time for combination has begun”. 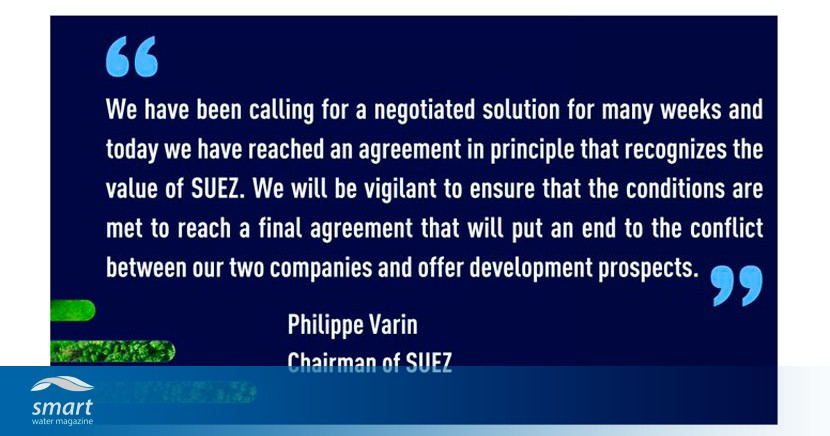