NEXUS FACTS IN THE WORLD

The water-food-energy nexus is central to sustainable development. Demand for all three is increasing, driven by a rising global population, rapid urbanization, changing diets and economic growth. Agriculture is the largest consumer of the world’s freshwater resources, and more than one-quarter of the energy used globally is expended on food production and supply.

The inextricable linkages between these critical domains require a suitably integrated approach to ensuring water and food security, and sustainable agriculture and energy production worldwide.

Water scarcity, desertification, and endangered biodiversity in barren lands are strong incentives to develop genuine solutions and resilient policies toward greening dry lands and turning them into more viable ecosystems for people, native animals, and plant species. Abundant sun and seawater in large areas in the world, particularly in arid and dry regions, offer an important and exploitable advantage for such goals through natural and artificial seawater desalination approaches. In this context, potentially sustainable methods based on seawater and solar energy will be discussed here toward increasing agriculture surfaces and enhancing food production systems in dry lands that suffer from water scarcity and food insecurity issues. Some approaches could be built on the land surface, while others on the seawater surface as floating farms. The prospective outcome from both approaches (on land and on sea surface) could help providing new sources for food production and to restore endangered biodiversity in dry regions. By adopting and optimizing such systems on a large scale, animal and desert plant species can grow successfully, contributing to the protection of soil and, consequently, to the reduction of the intensities and frequencies of dust storms in these regions. Countries with shrunken arable lands could also benefit from floating farm systems at least in part to mitigate food insecurity issues. (Khaled Moustafa, in Emerging Technologies for Sustainable Desalination Handbook, 2018).

The main four major problems affecting the water, its quality and treatment involve 1. Proper research on the issues of climate change, water shortages and the development of new technologies for desalination, reuse of waste, water flows and transfers of water between areas 2. Gaps in regulations in the sectors of water and its treatment 3. Establish good practices in decentralization of the management of water and recycling, involving the private sector 4. Peoples’ right to access to water in terms of quantity and quality regarding the considered pollution sources, those commonly involved are, uncontrolled dumping of domestic and industrial waste without any previous treatment. Affecting the aquatic environments quality, massive employment of pesticides and fertilizers affecting groundwater, high concentration of activities in confined spaces that generate pollution exceeding the power of self-purification of waters, accidental landfills often located on the banks of rivers and rivers, already weakened by successive drying and water companies’ activities.

It is now well established that energy consumption around the world is increasing exponentially. It is increasing at the same time as the world’s demography. The main source of energy is fossil fuel, oil and gas. Most specialists still give fifty years for the drying up of these resources. In addition, scientists are almost unanimous for the harmful role that greenhouse gases play in the exhalation of gases from climate change. The course towards the use of renewable energies: solar, photovoltaic, wind is well underway 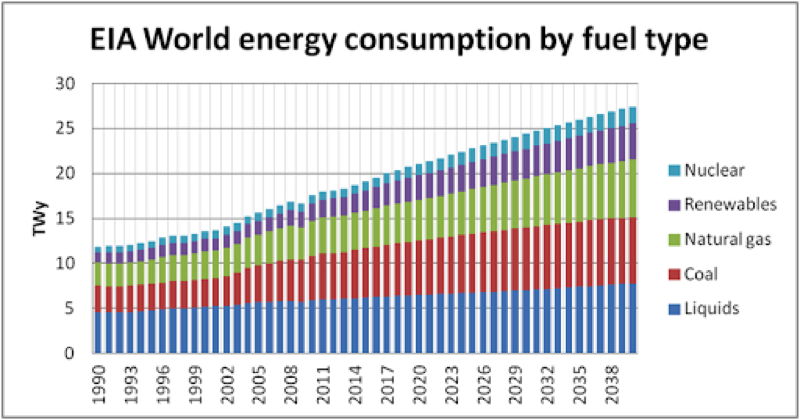 Due to population growth, urbanization, and climate change, competition for water resources is expected to increase, with a particular impact on agriculture. Population is expected to increase to over 10 billion by 2050, and whether urban or rural, this population will need food and fiber to meet its basic needs. Combined with the increased consumption of calories and more complex foods, which accompanies income growth in the developing world, it is estimated that agricultural production will need to expand by approximately 70% by 2050.

The persistence of malnutrition reflects deep inequalities in the distribution of and access to food at national and global levels. Ensuring that everyone in the world has access to enough nutritious food should be at the forefront of the post-2015 development discussions. Increasing food production in parallel with population growth, urbanization and a change in consumption patterns will require an integrated approach that takes into consideration the nexus of food, water, energy, environment and climate, while reorienting food production, distribution and consumption. Increasing agricultural productivity will be required, in particular in developing countries where the agriculture sector accounts for an important share of gross domestic product and where large productivity gaps still exist. Access of poor households to food and of isolated producers and smallholders to markets will need to be improved, in particular given that hunger can exist even in countries where there is enough food produced. Food consumption will need to be oriented towards diets that are less resource intensive and more nutritious, which will be crucial for the sustainability of the food system and for better health outcomes. The transformation and development of the agricultural sector will require investments on a significant scale. The public sector should typically finance infrastructural needs as well as research and development, while introducing adequate incentives for private investments, such as risk protection and better access to credit markets. In addition, Governments need to design a regulatory framework that ensures inclusive and sustainable private investments.