Tunisia in search of its agricultural vocation

Located in the North of Africa, just in front of Italy, less than 140 km by the Strait of Sicily, Tunisia is an agricultural country by essence, characterized by a remarkable biodiversity either in its land and sea. This country gave birth to Magon, the author of the first agricultural treaty in the 3rd century BC and to the scholar Ibn Shabbat who developed in the 13th century the irrigation systems of the oases of Djerid which are still operational today and irrigating one of the best varieties of dates in the world “Deglet Nour”.

Since its independence in 1956, the agricultural sector has had a strategic importance for Tunisia. In fact, the policy supporting this sector had two main concerns which are food security and social balance through ensuring affordable healthy food products and creating jobs in rural areas. Thus, the supporting policy of the agricultural sector was more dominated by food security and social concerns leading Tunisia to invest in cereals, cattle farming and milk production regardless of being competitive on those sub sectors, rather than an appropriate strategic orientation considering country specificities to orient production, achieve competitiveness and preserve the environment.

It is worth mentioning that Tunisia maintained some historical products which were well- known on the international markets such as olive oil, dates and some orange varieties but without working on productivity and supply chain improvements for many decades. A shift regarding agribusiness production orientation is imposing itself now because of water scarcity and climate change effects. Some new industrial brands, notably in the organic niche, are investing in the local value chain during recent years, pushed by tax incentives and exportation opportunities.

A company like CHO has even paved the way for the digitalization of the supply chain, by establishing traceability through Blockchain technology. This can only encourage the sector to upgrade and integrate technology more easily. The indexation of agricultural policy on social policy led to an agricultural policy relying on State intervention in the majority of fields as well as State subsidies and concealing competitive advantages, strategic choices and responsible orientations coping with competitiveness and sustainability. Since the 2011 Revolution, social tensions have forced successive governments to take urgent measures to restore some degree of calm in the inland regions and try to reduce the gaps in social inequalities.

The choices of distributing micro-credit and allocating small plots of land to as many people as possible have only exacerbated the gaps and marginalization, since for many beneficiaries of these measures, it has proven impossible to make their work profitable and to get out of poverty with an additional loan to repay.

The agricultural policy as a social release valve has still not been questioned despite the many reports revealing its flaws and economic consequences.

As a consequence, separating agricultural policy from social policy is compulsory to unleash the potential of agriculture and to improve its competitiveness. Relying more on the strategic features of the sector to innovate will be a visible switch in the development model, and this could be done without opposing to inclusiveness and sustainability.

Innovation potential in the Agriculture Value Chain
As a reminder, the industrial stream from science and technology to making available on the market a product and/or a service that meets a well-identified need is called value chain. In the case of the agricultural sector, the value chain model covers 5 stages, namely, farming and harvesting, storing, processing, saling and distributing. 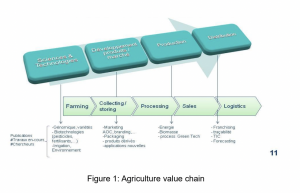 One of Tunisia’s greatest assets is its R&D capacity, particularly in the field of life sciences and biotechnology. This is materialized by the number of scientific papers in that field. Tunisia is in fact ranked 58th in the world and 3rd in Africa in terms of scientific publications according to the National University Center for Technical and Scientific Documentation (2017).

However, the bridges between the world of scientific research and the economic sphere are not well established. This is all the more surprising in the field of Agribusiness, where Tunisia has set up several laboratories and scientific research centers, covering the entire value chain (see figure 1). We can clearly see the many opportunities for innovation that are brewing there, if we put in place a technology transfer process between researchers and the economic world. The needs for innovative applications in the agriculturel value chain are poorly addressed by agritech startups which represent only a marginal part of the universe of startups in Tunisia. This stems from several factors that need further investigation.

At the first sight, industrial innovation only makes sense if there is a potential scale-up to make the investments profitable. The most striking innovations are therefore necessarily those that can cross borders. It is a condition of survival for startups. Tunisia was for example the first country in Africa to use IoT to optimize irrigation.

Better than that, the Tunisian company Telnet has even launched its own satellite to be able to offer this infrastructure service, normally at the expense of the State. The fact of having made such an investment shows the ability of the private sector to take the lead in innovation. From a technical point of view, technology transfer is a complex process that requires expertise and above all seasonned professionals who can be remunerated to match their experience.

In Tunisia, the Technology Transfer Offices are attached to universities and they are generally recruiting inexperienced young people. On the tactical side, we forget that to value research you have to value the researcher. And this requires to understand the stake of intellectual property protection.

The fact that the party that takes the most risk in a technology transfer operation is not the one that derives the greatest share of the benefit from it confuses the issues, and reduces the interest of exploiting the results of research for researchers anyway.

We understand better the interest of projects such as PHEMAC, a participatory hub for effective mapping, acceleration and capitalization of best practices, which brings together countries from the North and South of the Mediterranean to accelerate innovation based on research results in the Water Energy Food nexus. Nothing less is needed to help countries
establish their agricultural vocation.

Article Photo  courtesy by no one cares on Unsplash